This week the salt shakers went from this: 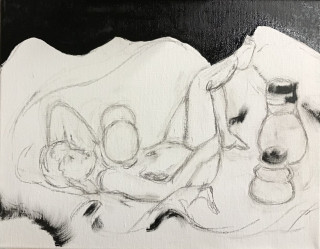 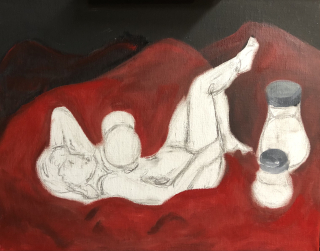 The town went from this: 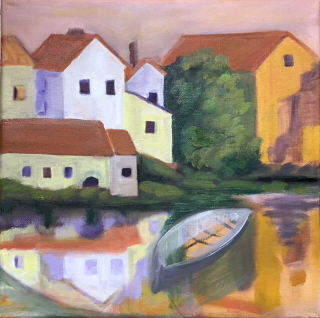 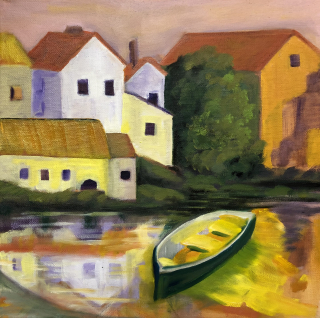 Posted at 08:56 AM in Miscellaneous Mockery | Permalink | Comments (0)

I am almost done with MSNBC. My problem with MSNBC?

Rachel Maddow’s already too repetitive  but not to this degree: if she starts this nonsense I’m shunning the entire channel.

Posted at 08:23 AM in Miscellaneous Mockery | Permalink | Comments (1)

We dropped off the Mini at the mechanic because it’s been oddly doggy. Not quite enough pep to get up a hill easily. Not enough pep to go from zero to anything easily. If I’m at a stop sign at the bottom of even a slight hill, then I am doomed unless if I stomp on the gas and roar the tachometer up to 6.

I am going to transcribe the remarkable conversation I just had with the mechanic at Dobb’s.

”Hello, Mrs. S_____? I’m calling about the Mini? We got one of our mechanics to drive your car, and I’m sorry, but I can’t tell you what’s wrong. It’s something wrong with your transmission.”

Gary had suggested that I had just forgotten How To Drive a Car, so I asked, “So there IS something wrong?”

Then he recommended that if I had to maybe I could find someone who would rebuild the transmission entirely. That’s already happened; it was still under warranty when Mini rebuilt it the first time.

So, it’s been 13.5 years since the last car hunt (begin the journey here, then skim to here). This hunt might be easier, Gary wants an all-electric car, and we actually could reincarnate the current Mini in electric. Subtract the rebate and it’s only a few thousand more than we paid for the Mini 16 years ago. And, while the Mini I bought in 2005 wasn’t reliable, evidently in 2015 Mini got religion and they are now loyal and true.

Or, we could get the transmission fixed. That “Oooohhhhhhh yeeeeessss” really scared me, though.

Posted at 08:25 AM in Miscellaneous Mockery | Permalink | Comments (3)

This is not news. 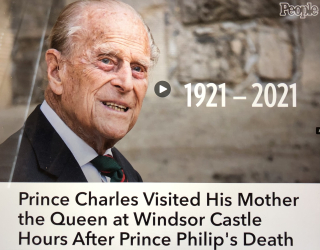 Why doesn’t this headline say “Son Behaves Like a Human” or something similar? Why has People magazine been shoving this at me all weekend?

Posted at 08:05 AM in Miscellaneous Mockery | Permalink | Comments (2)

This Is Why We Don’t Use ‘One’

I visited the Wikipedia pronouns page because we’ve hired some Southerners  which stemmed a work discussion about “you all” filling in as the second person pronoun, with “all y’all” meaning a specific number of “you all”.

Pronouns are just a mess. We’ve given up the fight on “his or hers” and went with “theirs” (or rewrite). 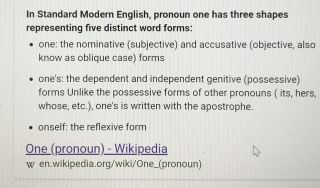 Seriously, One The Pronoun? I’ve always explained that you don’t punctuate the passive pronoun it as “it’s” because you wouldn’t write, “The man trained the dog to put it’s paw in hi’s hand.” And now you give me one’s as the possessive pronoun.

And on top of that it isn’t Oneself? Or Onesself? It’s onself? Really?

Of course, I’m using Wikipedia as a reliable source. That’s my problem. Of course, I have too many books to find my Chicago Manual of Style.

Well, even after we got the drainage fixed, the puddle in the basement welled up on the New Year’s Day ice storm, but it was an ice storm, and there’s expansion and blockages that go with it, so I let it slide.I just cursed a lot.

The ice storm cursing was nothing compared to the cursing last week. I read in the paper that parts of the St. Louis metro area were flooding because there was so much rain and no place for the water to go. Our puddle hadn’t show up for three months, so I decided to go down to my dry basement and feel smug.

Before the drainage work, we’d have a puddle every time it rained. Now it has to be a newsworthy event to prompt a puddle. I need to remember that that’s still an improvement, and no one in this neighborhood of rabbit warrens and river clay has a totally dry basement.

The smartest thing I could do is rearrange the basement so my art area is no longer on the border of the puddle so I don’t even look at it (on the now rare occasions it makes an appearance). But that would require more electrical outlets in the basement, and the moving of light sources. I did suggest we put Gary’s drum kit in the wet corner, just to see his reaction, which was very satisfying.

Only ... that was yesterday. There’s a puddle again, and frankly, it barely rained. Time to rearrange the basement. Or to put in a new back porch. Or to meditate every time it rains.

When the Abnormal Feels Normal

I was driving with Gary, returning from the only other stop on our bubble path, when I said, “Hey, do you want to go out to dinner? We haven’t gone out to dinner in ages.”

And then I remembered, there’s a reason we haven’t gone out to dinner, there’s a global pandemic, hello.

So strange that I’ve become so used to the pandemic that I’ve forgotten there’s a pandemic.

Okay, here’s a new reference photo for the salt shakers: 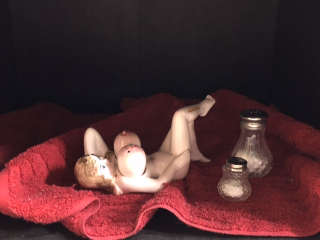 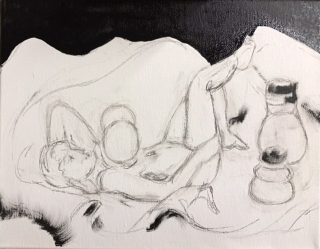 I don’t have high hopes for this one. I think it will just be fun.

The town went from this: 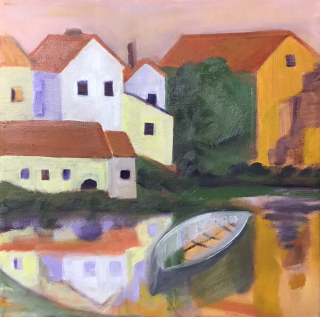 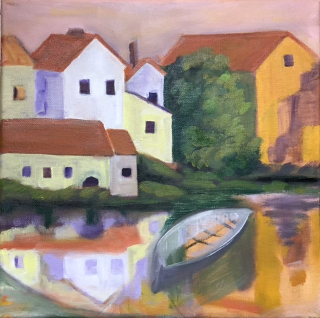 Posted at 08:16 AM in Miscellaneous Mockery | Permalink | Comments (0)

Things to Burn on the Barbecue When the Pandemic is Over

When it is all over, I am seriously lighting up the Weber grill and burning these things: 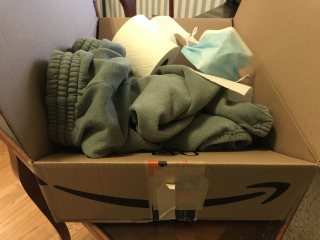 What else goes on the fire?

Posted at 08:59 AM in Miscellaneous Mockery | Permalink | Comments (4)

I know it’s all just material crap, and I should be more enlightened, but if the material crap talks to me I do get attached in all senses of the word. I’ve mourned every Roomba that died on me, I delight in Alexa’s asides, and I do love the many ways the Mickey Mouse app on my Apple Watch giggles and tells me the time.

Behold, the fate of Mickey: 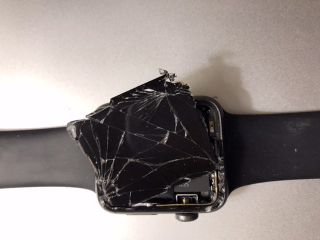 I put my watch back on after a shower. I was fastening the strap on the back of my wrist, it slipped out of my hand, and Mickey took a gainer directly to the wood floor and landed on his face.

And of course, I’ve already heartlessly exchanged him for a newer model. Old watch too wrecked up to trade in. I still have it, and when I’m emotionally strong enough I’m going to do an autopsy. I’ve already peeked at his guts. It would be interesting if I could use tape to reconstruct his glass and get him back again. He does show his face for a moment on occasion if I poke at it enough.

The watch is dead. Long live the watch. 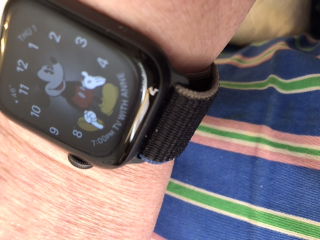 Posted at 08:14 AM in Miscellaneous Mockery | Permalink | Comments (0) 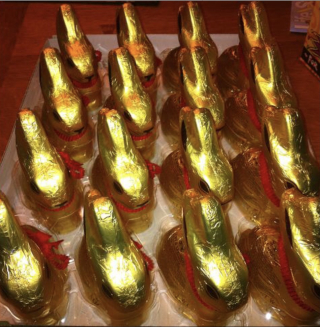 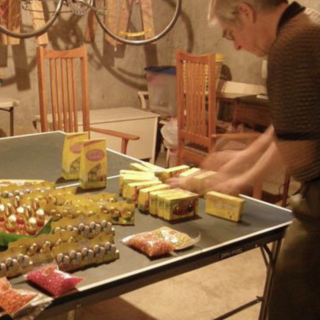 Not so much anymore. I didn’t even recognize this years paltry patch of mummified bunnies. 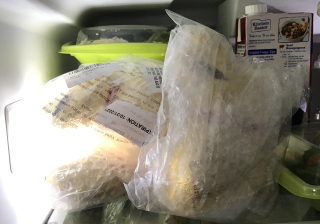 Three bunnies! Bubble-wrapped and tucked in the fridge.

Oh, Back to Hating the Pandemic Today

I had a doctor’s appointment a few days ago.

I arrived ten minutes early at 8:20 and texted “ARRIVED’ in response to their text of that morning.

At 8:40, ten minutes after the appointment time I again texted “Arrived?” Because I didn’t want to be pushy.

I made excuses - Good Friday, early appointment, significant people might be late —- and at 9:10 I called the phone number.

Shock. Apologies. Go ahead and go right in.

I explained to the receptionist that I had texted twice and got no response, and she checked and they had received no text. She said that I was late, and even past my 15 minute grace period, and I had missed my appointment.

I showed her the texts, again, and she said they hadn’t gotten the texts.

“Will I be charged for this visit?” I asked.

“Then I would be glad to reschedule my appointment.”  (Remember that for later.)

She said, “I’ll check with the doctor and I’ll see if she can fit you in.”

I had things to convey to the doctor, mainly tidying up some errors in my family history, like my biological father’s cause of death, and I didn’t want to be fit in.

Instead, I said, “I would be glad to reschedule my appointment.”

“Let me check with the doctor.”

I paced over to the glass door and read all the signs backward and tried not to fume.

She came back and said, “She says she can fit you in.”

I said, “I would be glad to reschedule my appointment.”

She looked surprised, and then said, “Oh, so you want to reschedule your appointment.”

This time I paused before I said “Yes” very significantly.

And I understand, she wanted to make it all right, and was focused in getting me fit in, and was unaware I didn’t want to be there, double-mask or not, and “I would be glad to reschedule my appointment” isn’t the same as saying, “Screw this noise, I am rescheduling my appointment.” And it was partly my fault for waiting so patiently.

And I would have left thinking that, only I was still in the parking lot when a different person called and explained what happened: “Sometimes that system just loses texts.”

So I rescheduled with her, which, as you know, I WAS GLAD TO DO, and then I asked if when I returned next week if I should wait for a return text, and she giggled and said, “Oh, no, don’t do that.”

I would have been fine without the giggle, but the giggle suggested to me that this was just a great lark we’d had, so i just said fine, thank you, goodbye, and hung up.

So I can’t really blame the doctor’s office, and I can’t blame myself for being extra polite for once in my life, so all I can do is blame this cruel pandemic so screwing up the simple task of visiting the doctor.

And Now Today I Don’t Hate the Pandemic

Okay, so evidently I have to stay in my bubble until the herd is immune. I am jealous and pouty.

But still, it’s been a few days now since Thursday’s doctor told me, and I’m feeling better about it.

I LOVE wearing the mask.

I’m not traveling anyway for the next few years.

I know other people miss hugging their friends, but I’m no hugger.

Really, my only complaint is that other people are free and I am not, but that said I do really like my prison.

I’m sure I’ll get stares if I’m in a mask in public in the fall - but why would I need to be in public? What would tempt me out? And stares would let me test out my old-lady-don’t-care persona, anyway.

Don’t know how old it will get by this fall, though.

So, virtual neurology appointment yesterday. Standard questions, and then at the end he mentioned a November study of Mayzent users who were vaccinated for the regular flu.

So that explains why we weren’t in the early trials — we would have dropped the numbers.

(If you are curious, Gilenya numbers are worse.)

I believe his recommendation was “Be vigilant and wait out the Covid.” So, I can’t relax even after I get fully vaccinated. And I’ll have to be a fragile flower.

Maybe there are enough fragile flowers that we can get an extra booster shot? Maybe?