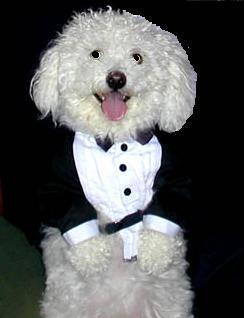 We had to put Douglas to sleep. It turned out he didn't have Addison's, his very first X-Ray showed body parts in entirely the wrong locations. He wasn't in pain, but it was just a matter of time. The vet gave us the option of keeping him there over the weekend, doing exploratory surgery, and if it was inoperable just not bringing him out of it. We decided not to have the dog spend a weekend in the vet's office on an IV and then die in surgery, since it seemed really clear something was pushing his organs into the wrong spots. We made a mistake with our first dog Fred and kept him alive way too long while we kept hope alive.

So, it is sad. But it reminds me of a story: Dog Death With Dignity

The darling,good natured dog will be missed.
When the Queen's father died we dressed him in his golf clothes and closed the casket. Great Aunt Myrle said "Where is he? Is he in there?" She wanted to see. So I guess it is a sign of age that I ask: Where is he?

Like Fred, he is being ... processed. The vet takes care of it, and a week or so later you are given a bag. Which you take on faith as being your dog.

Not the outcome I was expecting. I'm so sorry.

You know, I don't know if it's just me, but I never expect the ultimate outcome of life. My dad was given six weeks to live; he refused therapy, and when he died I was momentarily surprised.

Well, aren't I a shitty friend for not knowing this happened until nearly two weeks later. I'm very sorry about Doug. He was a sweetheart and I'll miss rubbing his oh-so-cute belly.

Well, you know Jay-zus is rubbin his belly now.