Hey! They have The Internets here in Chicago too! Therefore, I am posting with the laptop, and even posting dark non-Photoshopped photos. Yet. So far, all we have done is travel to the concert: from St. Louis to Chicago to a cab that cost as much as our plane fare, to the El, to another taxi, to the concert.

First, I would like to say to the dimwitted cow who sat one section behind me, if the opening act is playing, stop talking to your friends. And if the opening act is playing a very loud rock song, stop screaming to your friends. This woman did not take a breath for forty-five minutes, and I would tell you every personal thing she said, but it was too boring to bother with. In contrast to the Manic Talking Cow, my sectionmates were demure. We tried to get their names in case we encounter them on the BNL cruise, but they were coy. Is this against some concert etiquette? If so, Gary apologizes to Blond with Great Hair.

Regarding the cruise, I have high expectations for myself if I encounter any BNL band members among the 1,000 other fans there. I plan to be oh so cool and nod just enough to acknowledge their presence, but not enough to destroy the image of Cool Adult the gods give you when you turn 40. The gods give this to you in exchange for your metabolism.

I planned to use my Cool Adult consolation prize last night as well, but it appears the gods were holding me by the right hand when they dipped me into the Cool Pool. My right hand is not cool. For example, when the band made their entrance and waved, I did not not scream like a girl, but my elbow jackknifed and I gave a little girly "Hi, I see you" finger-wiggle wave.

"What the hell?" I asked Right Hand, "What was that? You know they can't see you, right?"

Right Hand made a pointy puppet shape and pivoted to look at me. "Steven Page just waved at me," it giggled. It then leapt into the air and made the rock horns.

I realize there are other members of the band, and it seemed this concert used their talents more than the previous one I saw. Still, I was sitting at Stage Right, which the fans call "Steven," as in "I was sitting fifth row Steven!" or "I got 11 Ed," which slays me each time I see that on the message boards. I believe every member of the band was heard from, including Kevin, who played the mandolin solo on "For You." Tyler got back at a waitress who dissed him at some fancy eatery. Jim's only comment was a plaintive, "I am not CarrotTop!"

Every member of the band was integral to a highly-choreographed skit they performed to close Angry People, one of the new songs. There was a good mix of new songs and the "Older, funny stuff," though I probably would have preferred more of the newer darker stuff. Because I am just that clinically depressed. And because the lyrics are just phenomenal.

Toward the end of the other BNL concert we saw in Saint Louis a few years back, the crowd all began to sing along with this funny little song about having a million dollars, which I had never heard before. We left, because we didn't know the words and Gary had this clever scheme to avoid the traffic. This time we stayed for the obligatory singing of "If I Had a Million Dollars," and the second encore as well. It all ended with much tossing of drumsticks and guitar picks like rose petals.

Even the next day Right Hand is still convinced Steven sang "Call and Answer" directly to it, and it has begun twitching. I am going to have to hold it down ala Dr. Strangelove. At any rate (suddenly, right  hand takes control of the keyboard) Help Me Steven! I am attached to this old lady but I KNOW we could find a way to be happy! Eeeeee! (Giggles) 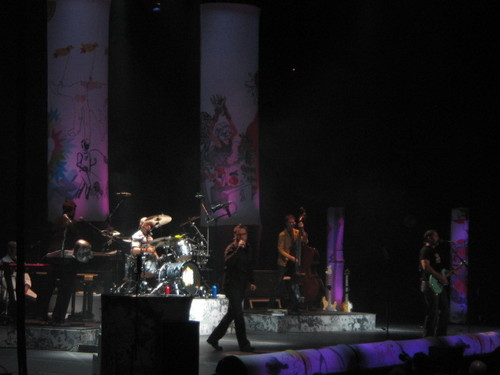 Posted at 10:54 AM in In Which We Mock Ourselves | Permalink

I did that little "Hi, I see you" finger wave to Meadowlark Lemon in 1973 and to Walter Koenig (Star Trek's Chekov) in 2003, and am please to report "Hi, backatcha. I see you, too" finger waves from both.

I don't know whether to be pleased or disconcerted that I am easily spotted in large crowds.

Oh, please, like I don't know who Walter Koening is. I AM flattered you didn't think Meadowlark needed an explanation.

Damn it Ellen. Photoshop is a professional tool, not a verb.