I love the guitar. I love that I pulled out some Christmas Carol music and I could hear the Christmas Carols as I played them. The nicest thing is that as you learn the guitar you aren't dogged by the evidence of your ignorance (unless you are foolish enough to have recorded it). When I made watercolors or stained glass, I'd work on my skills until they became acceptable, then I'd drop it. Watercolors ended with the iceberg watercolor (currently on display in the Queen Mother's guest room). I think the last stained glass project was the light fixture on the ceiling fan in the great room.

In both cases, they looked like what I intended them to look like. Whereas even if "Maggie May" sounds like what I intended, the notes evaporate as soon as I play them. There's no reason to be ashamed of a bad song, because it's gone. I can't get bored after a good song because I'll never know if I'll still sound good tomorrow. (Okay, "good" being a completely relative term. That would be "good" as in "Hey, that sounds sort of like a song.")

Another nice thing about music instead of Art is that when I look at any art project I see history trapped in it. The ceiling fan fixture contains a fight I was having with Gary in one of the six panels. 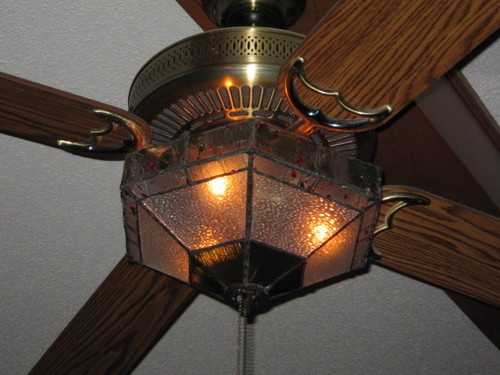 The outer left edge of the sofa table inset has a fight David had with his girlfriend: 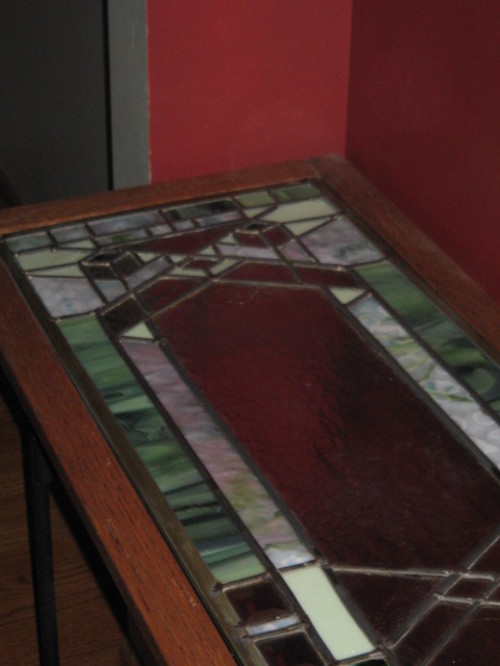 ... and the entire right side is the Chandra Levy case. September 11, 2001 and the six weeks after are at Karen's house in a stepping-stone, and it is one of the reasons I won't ever do another stepping stone.

See, music isn't like that. I'll remember what happened in history when a song was playing (Prom="Reunited" by Peaches & Herb), but nothing about what was happening when I learned to play a song. The only thing that is tangible are my finger callouses. Well, and any skill I may have picked up. All the bad notes just float away.

Posted at 12:00 AM in In Which We Set Ourselves Up for Mockery | Permalink

That post made me fall in love with you. AGAIN.