This morning, I left my bed and climbed into bed with Gary, naked. I cuddled up next to him and stroked his arm. I tiptoed my fingers up his chest and cooed...

This is because Thursday I was sitting at work and got an urgent phone call from Caroline. "Get a pen and paper. You want this phone number." The number was for a place selling barbecue and crispy snoots! Advertising! On the radio! In Illinois, okay, but not East Saint Louis Illinois (or East Mordor, as we say), instead it was in Edwardsville Illinois. A little college town. No murders there that I know of. So we drove the mere forty miles over the river and found Bulley's Smokehouse in a little strip mall.

I got snoots, pulled pork, applesauce, and "fried mashed potato balls," which means someone thought "potato croquettes" might not go well with barbecue.

Here's what it looked like when it came out (clockwise: applesauce, 'fried mashed potato balls,' garlic bread, pulled pork, snoots): 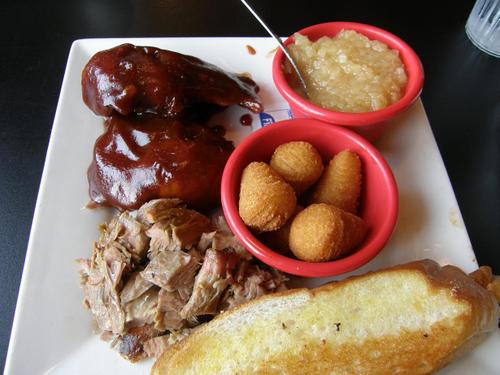 Here's what it looked like when I was done (snoots minus one bite): 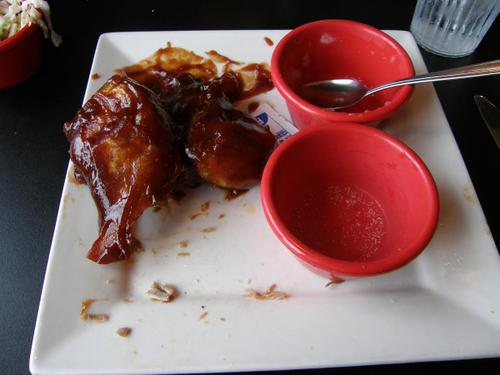 Let me explain. These snoots were not the Snoots of My Youth, in form or substance.

Form - The Snoots of My Youth had nostrils. (See diagram below.) 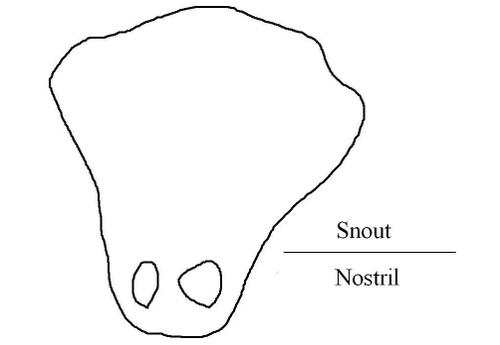 I asked our waitress why there was no nostril, because that was in my memory the best part. (Mmmm, tender tender nostril.)  She reported the cooks chased the waitresses around with the nostrils and then threw them away. (Yes, wasting food, Wilma would be appalled). I exclaimed, "But - that's the best part!" Gary added facetiously, "The tenderloin of the snoot. The snoot fillet , if you will." If I recall, it was the only part I liked to eat.

Substance - The Snoots of My Youth were not deep-fried. I know the cartilage of the snoot is what gives it the crunchy texture. But these snoots tasted like very strong pork rinds that have marinated in bacon fat, then been fished out, re-fried, and covered with sauce. The Snoots of My Youth had a tender texture that grew more chewy the further you got from the snoot tip. They were very well done, but certainly not crispy. The snoots I had twenty-seven years ago had a texture like burnt ends, or the tip of a brisket.

I'm not entirely against deep fried protein, but the taste was too strong and the texture was too oily. I only took a bite; Gary ate almost an entire snoot before he got tired of it. I also don't like Fun-Yuns and Pork Rinds after that one bite. Now, I might like a deep-fried turkey. Well, except for the wings, because really the people who eat wings are eating armpits, and that is just gross.

At any rate, the adventure allowed me to clarify that what I am looking for is Snoot Avec Nostril, well-done. And I must confess the croquettes were fabulous, and the applesauce? Did you know? Applesauce is actually made from little diced apples! The applesauce was just divine. It made me want to make some applesauce in my kitchen. Then, Gary said he might be able to eat dessert, and ordered one serving of "Drunken Bread Pudding," hold the ice cream, and we got this: 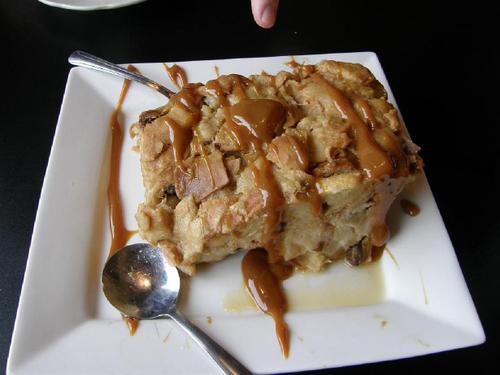 That's a dinner plate. That single serving was the size of a throw pillow. The new Harry Potter book. My upper arm. But it was excellent.

We took the spare snoots home for Manbitch, since he likes odd food. I still have a lead on the Snoots of my Youth, I just need to call Red's BBQ by UMSL and check and see if they keep the nostril and use the slow-roast preparation.

Posted at 10:14 PM in In Which We Mock Ourselves | Permalink

Ellen said: In Illinois, okay, but not East Saint Louis Illinois (or East Mordor, as we say), instead it was in Edwardsville Illinois. A little college town. No murders there that I know of.

Except the hairdresser and his two elderly clients.

Congrats on the finding the Holy Grail of nostril-free rhino-porcine Bar-B-Q. Personally, I'd prefer chicken armpit (the unclean-animal thing not even remotely a factor in that preference).

I don't know wich aspect of this disgusts me more, the snoots or the barbeque. Ick.

Noooo, say it ain't so. You're making this up right?!

Seriously. It was bad enough when you were jonesing for snoots in the first place. But now that you've clarified that you actually want the nostrils, well, we may not be sharing any meals on the cruise in January.

Ahhhhhhhhhh, I love me some barbeque, but I don't think I could do snoots.

I love me some ribs from Rendezvous in Memphis, right across the street and down the alley from Autozone Park where the triple-A Redbirds play. Mmmmmmmmm.

Friend #3 - as opposed to East St. Louis, where all the hairdressers are lying in one big bloody pile outside the City Hall.
Zayrina - How can you not like BBQ? There are so many kinds.
Connie - No, I'm not making this up. That bread pudding really was the size of my upper arm.
Melissa - Oh, Carnival wouldn't put nostrils on the buffet. They might serve them chopped up in the hot dogs, though.
ajooja - Rendevous must be on Beale? I loved the fries at Blues City BBQ on Beale. I know the Pork steak at Red's on Bermuda in Saint Louis is great (but they often run out of snoots).

Naturally, it hasn't occured to The Queen that, perhaps, hindsight is hindsight because it happened long, long ago and we've forgotten all of the exquisitely nasty details.

All that's left is the exotic loveliness of nostalgia.

I'm sorry to have steered you wrong. Who knew there was such intricacies to snoot preparation?

After laughing, I started thinking about how disgusting snoots are. But kudos to you for eating them, as I always appreciate odd food but sometimes don't have the stomach for it. *shudder*

No, Rendezvous is in the alley between the Peabody and the ballpark. It's probably the most world-reknowned barbeque restaurant and you have to walk past a dumpster to get there. :)

Hot Mom - “The exotic loveliness of nostalgia” – that is beautiful. And to think it was inspired by snoots...
Caroline - Not wrong, you helped me clarify the Snoots of My Youth
Amy - Well, I only ate one bite. Gary ate a snoot, and the leftovers went to Manbitch, who ate two.
ajooja - Aha! Jenny at http://notinkansasanymoretoto.typepad.com/were_not_in_kansas_anymor/
...recommended that same place. I’ll go there next time I’m in Memphis!

Holy crap I wasn't really ready for those pictures, whence I come visit you to see who links with love. Now I need more wine, dammit.

jenny - is it red wine with pig nostrils, or white? I forget.