So Cute It Will Make You Puke

Look at this sweet face: 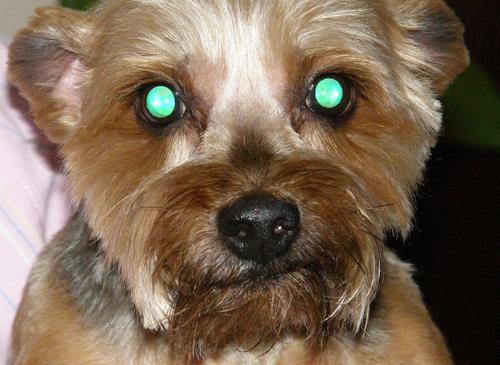 (And don't ask me what the story is with the green eyes. It happens even with the red-eye reduction on or off, which is ironic.)

He doesn't look sick, does he? No. He looks a healthy puppy. Granted, he looks bald for a silky terrier; they usually look like this: 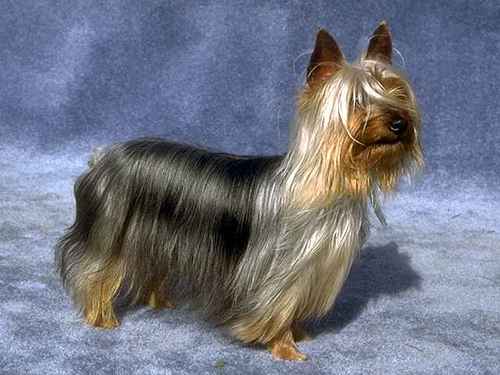 Yeah, like we're going to maintain that coat. I barely brush my own hair.

He and I bonded pretty closely while Gary was out of town, especially since he refused to go for walks and held his water waiting for four days for Gary to get back. He's taken to pinning me down while lying across my breasts or belly (whichever is larger at that moment) and staring at Gary to ensure he doesn't leave.

That was the arrangement when our dog-human hybrid pack was all snuggled in bed, listening to Gary tell a story his Mom had told him today. It was about Arhan-fay and the assumptions his fiancee is making about family life. It was particularly tragic since it had been through the Sandy Exaggeration Lens, then through the Wilma Poetic Justice Lens, then through the Gary Comic Relief lens (in short, the fiance is acting like Sandy did twenty years ago). Gary gesticulated at the ceiling. Mac and I listened patiently. Mac listened patiently while until at one point he could take no more and vomited in Gary's face.

Mac doesn't vomit like we vomit. It might have something to do with the Silky Terrier Hair, I guess he knows no sister Silky will be there to hold back his hair. but he takes great pains that the puke doesn't land on his paws or face. As he barfs, he does this full-body shudder that strafes the vomit over a wide area.

And, it is sudden! There's no horking or burping beforehand. He's just sitting there calmly on your chest, looks up, ARRRURRPPP, vomit convulsion! licks his lips, then settles back down while everyone else screams and clears the bed. And, in this case, gets the camera.

Caution! Disturbing Image Warning! But funny! Funny like a guy covered in dog barf funny! Click, you know you want to!

And, yeah, that's dog barf on the pillows in the background.

Adorable dog. Yeah, we're all used to dog / cat puke around here, too... it's just a fact of life.

This blog is great. Adding it to my blog roll. I'm new around "these parts".

I can ROFLMAO because I have a dog who empties any or all orifices when he damn well pleases. His cuteness is the only thing keeping him alive.

Sue - Well, usually the dog pukes up his food so he can enjoy it later.
Aaron - Okay, now this site looks interesting. And, just today Friend #3 pointed out the newspaper article you referenced in http://www.proctorformayor.com/2007/07/16/jews-help-muslims-fight-county-council/
Friend #3 - Look at that (above). Everybody is talking about the Jews and the Muslims uniting. And, Ricky is so cute he will live forever.

P.S. I'd feel better about Ricky's immortality if he'd stop tumbling down the stairs.

Actually, if I don't happen to "catch" it in time... the dog will eat what the cat barfed up. It is a well-designed system. Now if I could just get the cat to eat... well, you get the idea.

A careful examination of Gary's shoulder vomit shows a masticated carrot chunk. Who would feed a dog raw carrots?

Friend #3 - It's a cry for help.
Sue - the one time my two dogs did that was on the way to take one of them to the vet to fix the flu that was making him puke. Of course...we had to treat both dogs after they "shared."
Queen Mother - ah, but that's a cooked carrot.This is the refrigerated food at Schnucks Karen suggested we turn to during the pet food scare. It's fresh! No preservatives. All natural ingredients like cooked carrot chunks. We could eat this in an emergency.

Gee, I didn't think to whip out my camera after my 13 year old Labrador lost it - twice - on my beige carpet. Nasty! It's been 4 days and I may have finally gotten rid of the odor...

Leave it to TheQueen to find the funny in vomit! Thanks for the chuckle!

I just laughed for 5 minutes. I sooo needed a good laugh today. Thanks Queen, you never disappoint;)

Connie - Well, the dog is leaving brown pudding-like puddles in the house now. Poor baby is sick. Hope your lab is better.
Autumn - Sorry you were that hard up for a laugh, Autumn!

Thanks for checking out my site.

I like to see the non-native view of Saint Louis.