« UPDATED: Born Without An Asshole: a Discovery Channel Special | Main | In Which The Heartless Cows Redeem Themselves »

I introduce the first in a series of myths. These are events from our history that do have a basis in fact, but over almost twenty-five years of Gary's embellishments they've grown to mythological proportions.  I begin with the factual details from years ago, then I ask you to compare it with the current version.

Background: Years ago, there was a restaurant outside Saint Louis named Noah's Ark. I always remember it as a fancy place only adults were allowed to eat. When we were kids, it was the place parents went on a date and came back with giraffe-shaped swizzle sticks : 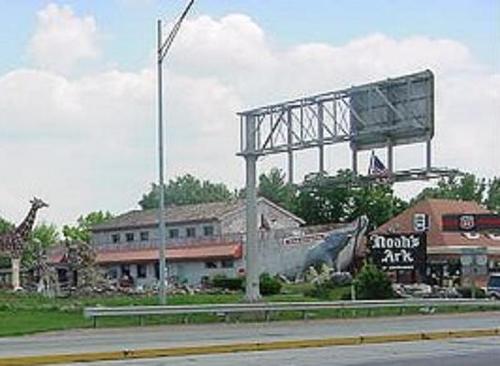 It also convinced generations of children that every restaurant should look like an ark and be filled with examples of giant taxidermy.  I'm sure you have an ark restaurant in your town.

The Factual Basis for the Myth:

Gary and I grew up and thought it would be fun to eat at the Ark.  And here are the facts: I went up to the buffet, I picked up a small bowl full of whipped butter, and I dropped it. It landed butter-side down on the carpet. I walked back to our table. After I sat down I alerted the waiter there had been a butter accident. We were the only people in the place.

The Myth As Gary Tells It:

(Usually he tells this story at any gathering that involves butter and strangers. Or, he could see a large animal, segue to Noah's Ark, and work it in.)

"I remember once Ellen and I went to eat at Noah's Ark. She was getting this enormous bowl of butter off the buffet, kind of hefting it up onto her shoulders, and suddenly it flipped out of her hands and went sailing up into the air, then this big ball of butter came crashing down on her. She's lucky she wasn't crushed. She dodged the butter but it ... it ... exploded on the carpet. Butter everywhere! Butter on the walls! Then, what did she do? She ran, she ran like a dog back to our table. When the waiter came by he looked at the butter, and he looked at Ellen, and Ellen was all "Doo dee doo, la la la, what butter?"

What the Future Holds:

Noah's Ark was just recently razed to the ground, so I am sure that in the next re-telling the butter-stained carpet will be the reason given for the restaurant's decline. By the time I am seventy I imagine the crashing impact of the mountain of butter "...caused an earthquake! The Ark slid into the river! We barely escaped with our lives!"

Moral: Children, do not screw up during your early marriage, and if you do, always cop to it.

Posted at 09:54 PM in In Which We Mock Our Husband | Permalink

Now, see, if Noah's Ark had only used the Butter People, your butter faux pas would not have caused the shutdown and ultimate razing of this once fine St. Charles landmark.

Any news on who gets the elephant?

Pssst... I know how to make their famous New England Clam Chowder. Heh.

Friend #3 - I deleted the sentence about the clam chowder recipe that begins with "start with a can of Campbells Clam Chowder."

The elephant was in the news last week. He's residing in the former owner's backyard. The woman who lives behind the former owner is asking the county to cite him for it because she's tired of seeing elephant ass out the window. Now, the county comes out and measures my grass on a regular basis because a neighbor calls every time we skip a week of mowing, but apparently there are no ass ordinances in the county code. At least that apply to animals.

I only ate at the Ark once. It was Father's Day. There was no butter on the floor.

In my younger days when I did a lot of partying, Noah's Ark was always the one place in St. Charles that I knew how to get to. If my friends wanted me to drive to St. Chuck to party with them, they'd give me directions to wherever they were by using Noah's Ark as my departure point.

Hmmm... our nearby town has a Noah's Ark. It, too, is fancy-smancy.

Caroline, can you blame me for wondering about this place now that I live here?

Personally, I think if this nonsense with your neighborhood continue, you should go to the city/county and present a case for malicious prosecution. This is harrassment, girlfriend.

Autumn - And don't you forget it! It will serve you well.
Caroline - Given that there was already a flap over the guy who had the Noah's Ark billboard engulfing his house I am not surprised.
KC - Yep, as a kid I always knew it would be a long trip when Noah's Ark was one of the landmarks.
Sue - Really? Does it even look like an ark like ours?
Friend #3 - I think the owner should go out to his yard and fashion elephant dung under the elephant ass to please his neighbor.

Actually, it does, but no animals outside. It has been in the same location since I can remember and I'm 50, so that's quite a long time. I remember my parents going there when they wanted a "special" night out... like thier anniversary or something.

Sue - That is cool! I wonder if they bought any of the animal dioramas from our Noah's Ark. And that giraffe must have gone somewhere.

Oh! My grandparents in Chicago had a splendid collection of swizzle sticks from establishments they patronized over the years (some grandparents collect matchbooks...) and my favorite of all was always the yellow plastic giraffe. I wonder if it was from here!

Even though basically it is a can of potato soup and a can of chowder combined (that's what got me when I first saw the recipe).