I was outside, doing what ended up as only a tiny percentage of my fall yard cleanup, when I thought, "I need soup." Since we had not recently had dinner out involving soup, there was no soup in the refrigerator: 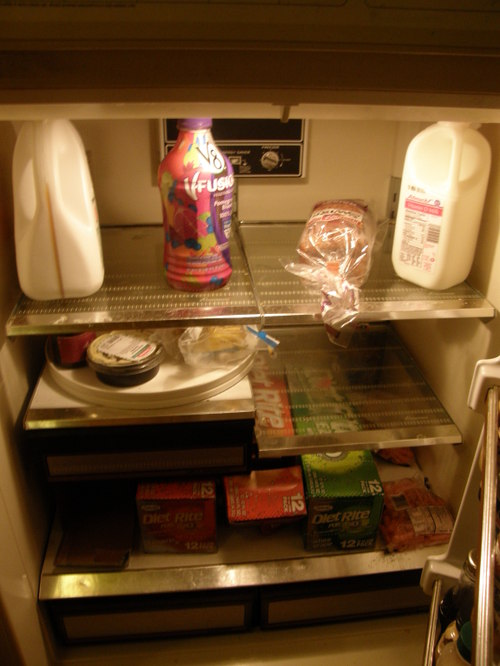 I went mad, went to the grocery, and started a crazed soupfest. Soupfest in Progress: 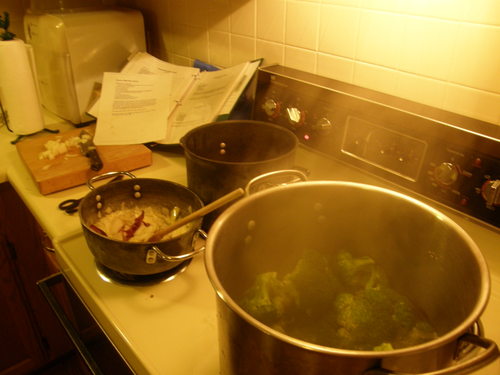 The easiest to make was Mushroom and Wild Rice: 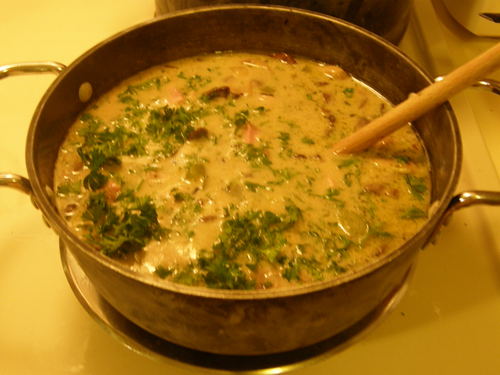 Next done was the infamous Cream of Carpet soup. 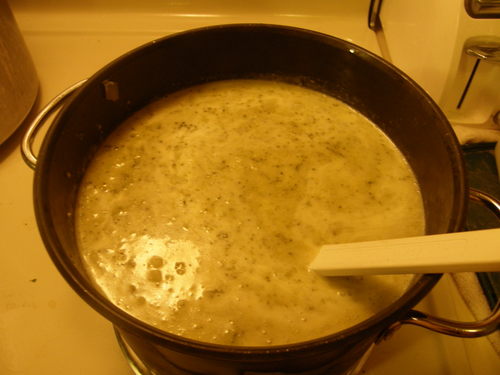 Really, it's Cream of Broccoli. However, Gary once drove it to a work function, and the crock pot tipped over just as he was pulling in to the parking spot. He scooped it off the car floor, plopped it back in the crock pot, and left the crock pot on his desk while he drove home to shop-vac the car. However, his warnings about the soup didn't reach the ears of the party organizers, and it was half gone: floor dirt, carpet fibers and all by the time he got back. Of course, I had an identical crock pot biscuits and gravy experience, except I didn't even think of warning my co-workers. I would have gotten away with it if they hadn't found that penny.

Potato soup, which would have been Roasted Garlic and Potato soup had I remembered the garlic: 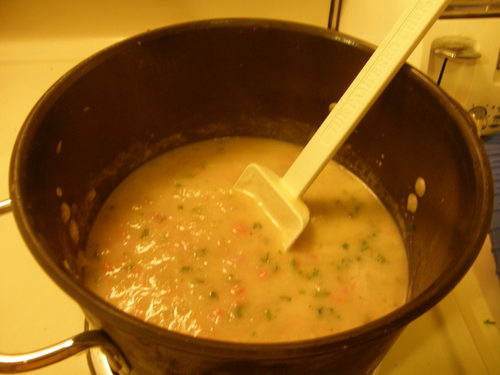 Acorn Squash, which was new for me: 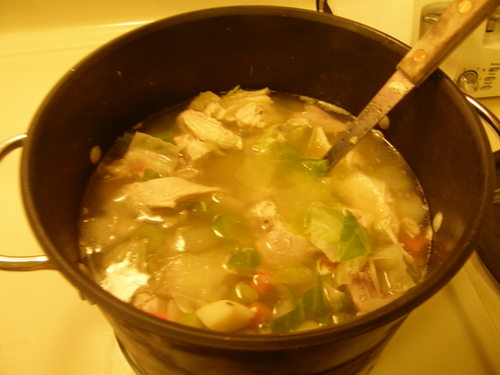 No soup is complete until Gary has tasted it: I wonder if Gary has made the connection between his behavior yesterday and my sudden domesticity? Soup = Love.

Posted at 01:58 AM in Miscellaneous Mockery | Permalink

Three cheers (or ladles) for Soupfest '07! I made Roasted Butternut Squash Soup last week and an fixing to make minestrone next.

It must be the change in the weather. Yesterday, I wanted to make veggie soup and lentil soup and chicken soup. However, I managed to accomplish zero.

BTW, does Gary have to be baptised in the soup before it's soup?

And I must confess, I was expecting to see more of any variety of Dr. Pepper in your fridge...

I am confused by that last pic. Did you make soup or open cans?

I made mom's chicken soup Wednesday night. I had no idea I was just 12 hours away from an intense migraine, and would spend my two days off eating Excedrin and chicken soup.

You ARE bringing cream of carpet soup in tomorrow. Note: This is a demand, not a suggestion. I will stand in your personal space and talk baby talk at you all day both in speech and over IM unless I see a moderately sized plastic container with cream of carpet soup in it and my name on it. (Okay, the name is optional, but it better be for me.)

I forgot to add to my first comment: what, no soup version of the Grilled Chocolate Sandwich? Because that could be mighty tasty, a chocolate-y soup with buttery croissants for dipping. I'm just sayin'.

Catherine - Oh, oh, my Acorn Squash was Roasted too! It's the first time I made squash. Nasty. AND it killed my blender. My blender chewed up its own bottom when I tried to blend it, hence the lumps.
Becs - Dr. Pepper is a special treat. He drinks it at work and his Mom's. At home it's all Diet-Rite. And I think he hugged the white bowl o soup and the condensation got on his shirt.
Zayrina - Okay, I should have used fresh chicken stock. But the canned was on sale 2 for a dollar. So, when I cooked the chicken for the chicken soup I used that stock in the potato soup.
Friend #3 - And...thats why theres no Cream of Carpet soup for you. It tastes really bland, since it was made with the canned broth and no fresh broth. You are used to the Tea Party version, which is greatly superior.
Catherine - Oh, that's just nasty! Of course, I'm on Day 14 of 28.

"Zayrina - Okay, I should have used fresh chicken stock. But the canned was on sale 2 for a dollar. So, when I cooked the chicken for the chicken soup I used that stock in the potato soup."

Ah... gottcha. For the record I make a delicious beef and barley soup. I ALWAYS use commercial broth of some sort and I do consider it "making soup". It's just that when I saw the cans I started to think you were making a joke that sailed right over my blond {starting to turn gray} head.

First... NO ONE should have a refrig that is that clean. Geez.

Then, you sure you didn't slip some meth in with your morning coffee? That was waaay too much production. My gosh, woman... you opening up a soup kitchen? Wow.

Last...the carpet soup? Did you come read about my car/cheese dip configuration? :)

Okay, for the record. I'm jealous. I wish I would have been home making soup this weekend. Those all look yummy.

You have a foodie blog! Excellent!

The lazy susan in the fridge is inspired. I'm going to do that tonight.

Wow! You're certainly Little Miss Suzy Homemaker, aren't you? I'm really impressed. I don't cook at all, but I can heat up a mean can of soup when needed. Luckily, I married a man who loves to cook. Last night we had crawfish etouffe and the night before he made jambalaya. Damn, he's good!

That diet s#$@*t soda will kill ya! I wish my ice box was as streamlined as your fridge! Condiments are my downfall; once opened, I never look at them again! Trader Joe's has a great recipe for Chicken Tortilla Soup, a southwestern food fashion basic. Easy, quick and tasty, it's the only soup for me these days. Your variety looks good though. Fact is, the more I cook, the more I eat.

Zayrina - Okay, you got it out of me. The mushroom soup does call for a can of campbells cream of mushroom soup.
Sue - I know! I'm in overproduction mode since its like Ive got a little energy window on the weekend.
TasterSpoon - Thank my Mom, the lazy susan was at her insistence.
KC - Gary makes ... frozen pizza. He made scrambled eggs once before we were married. Etoufee with real crawfish sounds fabulous.
Judith - yep, that's what Gary thinks too. Turns out we eat less when we dont cook but it's higher in cals.

wow, seriously, now I'm hungry for soup. I think I'll make a bunch tomorrow - Matt will come home (eventually... he's started working those 12 hour days that I fear will last the rest of his working life) and not know what happened. And he'll be happy.

Marcia - My soup made Gary happy. And tomorrow, some of it may make the people at work happy. Some. Maybe enough for a sip for each person.

Friend #3 - some may also call you Marcia, but you will always be Friend #3 to me. Marcia is The Pink Shoe.