I was in a photo shoot for work last week. I was playing a plump little dumpling of a middle-aged woman. I've worked to perfect this role for years, putting on weight, keeping it on just in case I am asked to play the part of a middle-aged female TeddyJ client. And then, I was! Forty-second Street!

So a few hours before the shoot, I was at a department meeting, and looked down the row of faces to see how many other faces I had beaten out for the role of middle-aged dumpling. The first thing I noticed was that of the nine other people at the conference table, eight of them had a weak chin, no chin, a sloping chin, or a double or even a triple chin like mine: 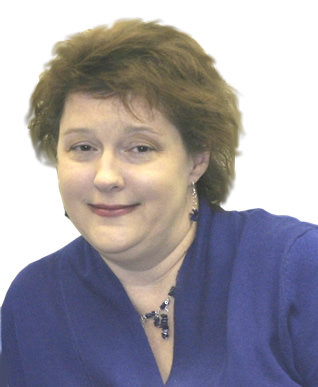 Only one person had a well-defined chin at that table: the twenty-five year old. Over thirty-five, we all had chin issues. As it was a dull meeting, I brought that up. Immediately, all the men began stroking their chins and saying "I don't have a double chin! I have what is called a full face," and "Speak for yourself. I have a good jawline."

Later I surreptitiously checked those men in profile and I was right, plenty of extra chinnage. "Why have I never recieved solace from this before?" I thought, and then I realized, they all have goatees. When you look at these men straight on, you see the goatee, not the chin.

So I call SHENANIGANS on this Goatee BS! Really, check out the profile of the next Goatee - ee you see. It is an unfair advantage men have. How many strong-jawed men have you seen with a goatee?

Clearly I need to adopt a goatee. 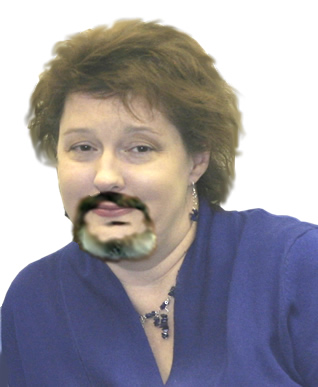 I think it suits me.  AND it hides my chinny chin chins. AND, no more worrying about those stray chin hairs I've been finding.

Of course, if I'm going to be maintaining a goatee, I might as well break my ban on false eyelashes. Okay. I'm being serious here. I really did buy these last weekend. 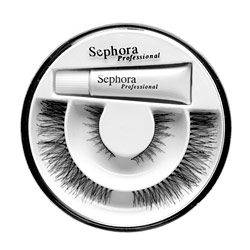 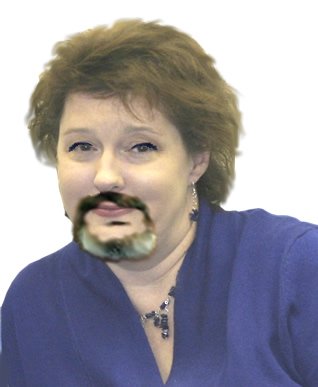 It's subtle! Really, flip back and forth between the two and you'll see what I'm saying. Well, you'll see anyway when I test it out this weekend.

So, since the photo shoot I had my hair done and played a little with brushing it all to the front a la Liza Minelli. A la Eva Gabor wigs. A la this kicky do: 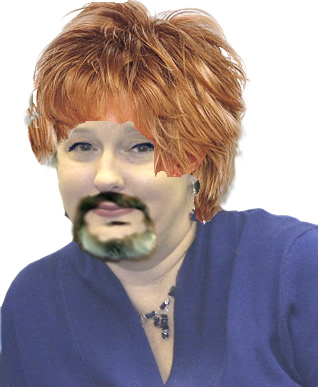 See? You don't even notice the triple chin now!

UPDATE: I just added" goattle" to www.urbandictionary.com. Let's see if it gets approved.

Posted at 10:36 PM in In Which We Mock Ourselves | Permalink

I dunno, the gray in the goatee ages you a bit. If you grow one get the "Just for Men" stuff and comb it in.

I think you are just being jealous of Gary's banana face.

Nope, not noticing the chinnage at all. Hiding under the table and the table top blocks the chins entirely.

(The lashes, on the other hand, I think will distract from the chin all by themselves without the side affects or splinters).

Loving the wig. that color is divine.

I could have a goatee by next week if I stop plucking. Maybe it's an option I haven't given enough thought to in the past.

That hairstyle and color looks great on you. With your eyes and long lashes you'd definitely have a Shirley MacLaine thing going on.

I love fake eyelashes. I had them put on one day at the MAC counter and loved it. My ex-boss used to say that they're quicker than mascara when you get used to them. (I bought some glittery ones for Halloween)

I like the soul patch within the goatee. But actually, a goatee on a man immediately makes me assume he has no chin, so I always check for it.

I wish I knew how to wear eyelashes. I inevitably look ridiculous. And drunk.

I'm a sucker for red-headed women with fake lashes and a beard. You had me at goatee.

Hope you're having a fabulous Halloween. I am.

Now you need to go to http://sendables.jibjab.com/ and make a card in which that goattled chin wags...

I thought it was very time-zone sensitive of you to post those images when it was already Halloween here.

This is exactly why I love you.

You look smashing in that shade of purple. Also, I love how everything put together looks like an "If They Mated" starring Vicki Lawrence and James Lipton. I say this with love, of course.

"" - Okay, usually I can who it is when someone leaves an anonymous comment, but I think you all have decided just to play the prank you play on substitute teachers when you switch names. You wacky kids! Oh, and I don't look distinguished?
.75 - I really thought about photoshopping those in,
Sherri - Yeah, the lashes have been rejected by the husband. I was rushed, though and the application was not perfected.
Candy - Marcia yanked a hair off my chin last week in the car. She's handy.
~~Silk - I couldn't really pull off that color, besides that's Catherine the Red's color.
Amy in Stl - How did they work out? Mine kept sticking to the applicator.
TasterSpoon - Yep, drunk. Drunk was one of the words Gary used to describe me.
DreadPirate KC - You are one goodlooking pirate! Of course, you are one of the name-changing scamps.
Magpie - Ohh! "Goattled!"
Big Dot - Happy day after Halloween!
# 3 (aka Hot Mom) - I'm so glad to see you comment, yet struck to the heart that YOU DON'T KNOW THAT YOU ARE #2.
Catherine - Yes! It's the false eyelashes that put it over the edge.

Well crap when did this stop leaving my handle automatically?

I couldn't think of a response when I first read this. Today I looked around our team meeting and noticed a lot of extra chinnage. The only person with chin hair was on video conference from the UK, so I couldn't get a good look at the under-the-hair situation.

Zayrina - I added it for you twice, then I just gave up. You used a different IP for the banana comment.
Caroline - Oh, you know he had a goattle. (And for some reason I can't get it approved in urban dictionary, damnit.)