Last Saturday I fell asleep in the nest and woke up dreaming of chocolate babka. I assumed I must have fallen asleep during that episode of Seinfeld, but the tivO denied that it had switched to that station. I can only guess NPR or CNN brought up babkas.

"I could make a babka," I thought, "I can cook anything." I looked up babka recipes. Way too hard.

"I could buy a babka," I thought, "I can buy one on-line." Then, whoa. Thirty bucks for a babka! And twenty for shipping. More research found a ten buck babka. With forty dollars shipping.

"I could make a babka," I thought, "It would save fifty bucks."

"What is it with you and this babka obsession?" Marcia asked. "I've never even had a babka. I think it's a New York thing."

I should have shown her a photo. Chocolate in bread. I read up on a few more recipes and noticed many of them talked about the "paddle" and how one should beat the dough until there are strings from the bowl to the "paddle." I assumed this strange "paddle" came with one of those fancy stand mixers like a KitchenAid.

The cheapest one cost six babkas with shipping.

"I used to have my grandmother's stand mixer until it finally burned up. It was a KitchenAid."

I specifically didn't want to buy a KitchenAid, because even though I have been on a good food run this past month (egg tartlets, beef stroganoff, chinese pork ribs), I'm not usually a good cook. I rely on luck. The food gods smile sometimes. And I don't want to be the yuppie  middle-aged suburban professional who heats up fishsticks in her Gaggenau oven.

But I am. So I found a recipe and a KitchenAid for only three babkas with shipping at the Best Buy. And today I used it. Look at me all fancy with the dough hook. 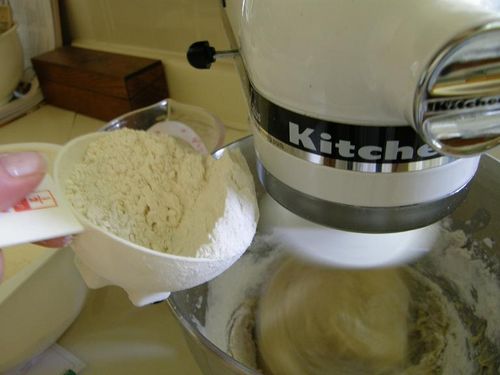 That thing made amazing fluffy egg whites, too.

I would show you the step-by-step but I got caught up in the continuing failure-by-failure. First off, I did roll out a giant square and spread chocolate filling and egg whites on it. Then I rolled it up like a jellyroll, only imagine rolling nacho cheese dip up in tissue paper. Then I was supposed to twist the big soggy mess in my hands five times? I twisted it once and dumped it in the pan. But I still had hope. And I had another chance; I was making two loaves. I confidently baked them.

Here are The Babka and its twin brother, lesser babka. 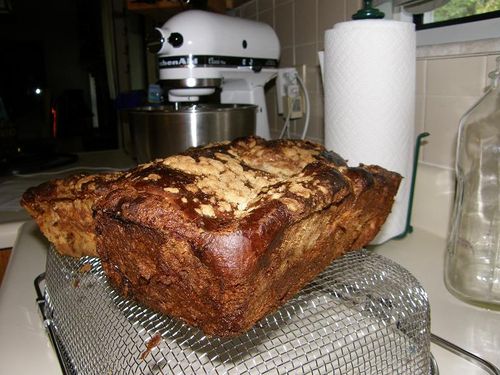 I was so excited! I let them rest and then carved one in half. 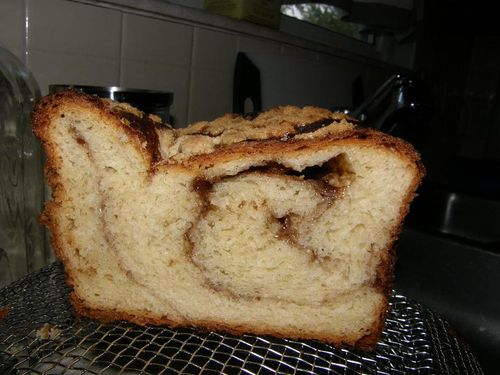 Sooooooo disappointing. I did everything right. I even bought a KitchenAid. It looks nothing like the photo at the top.

I think Babkas are one of those things you have to have a heritage to be able to cook, like Chinese fried rice.  Perhaps other people can't cook fishsticks.

Posted at 12:15 AM in In Which We Mock Ourselves | Permalink

Chocolate babka is not babka to me. It's wonderfully eggy cake-like bread.

Come to Jersey. We'll go to Manville. Manville is absolutely stuffed with little old Polish ladies who could make perfect babka in their sleep.

By the way, I covet your mixer.

I agree with Becs. My sister-in-law and step-grandmother...both Polish and both Queen Babka makers!

I would have recommended going to Lake Forest Bakery or something like that.

Okay, but how did it taste? Looks aren't everything.

If you come to Jersey, I'll fight it out with Becs over whether or not you can get the best babka in manville, or at the Gaston Avenue Bakery in the next town over.

Babka's hard, you have to roll it out SO THIN to get it to look like the one in the top picture. I've never made it that well, and I've practiced. Also note that the top one is folded, which isn't fair.

I have that mixer, I just covet the dough hook. Mine didn't come with a dough hook.

You'd be better off with my aunt's Jewish Apple Cake. Oyyyy veeeyyyyyz mere... Mmmmmm.... (Only don't ask her for a recipe that has cups, teaspoons and tablespoons as units of measurement. I don't know how she does it, but it's fabulous every time she makes it.)

Mmmm, looks good to me. Fresh baked carbos! I nevermet a carbo I didn't like, you know!

@Tami - Gaston Ave might just have premium not-home-made babka. But the premo place for Polish sausage is that place on Wood Ave. in Linden. Their kielbasa is to die for, along with the kabonas'.

Oh, man. It might just be worth a trip to Linden...but only if I'm carrying concealed.

Ya know...I just realized...these people might be playing fast and loose with the amount of chocolate in the recipe vs. what's in the photo. I say give it more chocolate. Ridiculous amounts of chocolate. And yes, twist it as many times as the recipe says.

I've realized a lot of recipes lie. You usually need twice the butter but half the sugar. That's my theory, anyway.

My first thought was McArthur's. Are you familiar with them? If not, you really must visit. You're welcome.

But alas, their website makes no mention of babka. Of course, it also does not do justice to the many things they do make. I remember having birthday cakes from them as far back as my 9th birthday. They made my wedding cake. They've made birthday cakes for Rebecca. I've driven their cakes and pastries to other cities.

Oh, and I forgot to congratulate you on your mixer. It took me a long time to buy one, too, but I'm very happy I did. Don't use it for chocolate chip cookie dough, though. It over mixes.

I'm not sure what recipe you're using, but here's one that looks much more reasonable.

The thinner you roll your dough, and the more times you roll it up jelly-roll style, the more layers of chocolate you will have in the final loaf.

I have Big Blue, the KitchenAid mixer, btw. I resisted for a very long time, but now...

If you want me to test this recipe for you, let me know. I've never heard of, much less baked, Babka before, but I'm very comfortable w/ yeast breads, so....

Becs - "Chocolate babka is not babka to me." The Net suggests there is Polish Ukranian babke vs Jewish Babke.
.75 - I can make white bread then, and you can't. (Oh, and Lake Forest closed, so I hear.)
Magpie - It was tasty enough. Like good eggy bread, with a hint of chocolate. A little like a choclate chip bagel.
Tami - If you want, I can get the order number. I've got the list of accessories still lying out (kind of hoping Gary will see theres an ice cream maker accessory). Do you have the 4.5 qt one?
3- I already have MY grandmas apple spice cake. If I wanted to pare and grate a dozen apples I would make it.
Judith - Have you met gnocchi? Too soft.
Becs - You made me realize that photo is doctored. Look at the two slices. The photo suggests they were just divided - but the swirls dont match up.
Caroline - The year the tea party invitations were printed on cookies? McArthur's. And, I take your advice on the chocolate chips cookies, because you are the choclte chiip cookie queen,
Meredith - Anne W_____ at TeddyJ is the baking expert, and she says my big problem was I didnt use bread flour. Trying again tomorrow.

I somehow have to smile when I read this. I tried my first chocolate babka last weekend. The swirl part was really complicated as the filling tried to escape. It turned out that the babka tasted great, but it didn't look to good ;-) It looked like a bread with canyons filled with chocolate. Never mind, I will try it again. One day it will work (I hope).

Karin (Hi, Karin!) - I just bopped over to your blog and it's in GERMAN! Did you KNOW that? Of course you did! You master two languages.

I think I stopped trying after perhaps five babkas.

whole foods has the best babka, just like the top photo...chocolate or cinnamon for around $6. I think it's Lilly's brand...

jt - cool! I'll have to visit the whole foods this weekend. Thanks!

Just bought one at HEB in Texas for $4.95. Small one but it was very good with some strong coffee after a big steak dinner (yeah... everything is bigger ... and cheaper... in Texas).

Mike O - I myself was born in Texas.

Post the recipe and let the xperts correct what's wrong that easy....