« Outraged Over the State of Movies Today! | Main | In Which Strangers Do Not Appreciate Gary's Tone »

Check this out. After six weeks of illness (and a few weeks of laziness preceding) I finally re-hung some prints Gary knocked down. 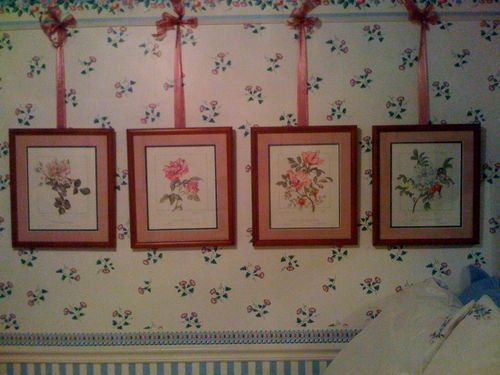 Don't worry, I just straightened out the second from the left.

The thing is, this means I am returned to health.

I have missed my health, such as it is. Before the Wild Boar Plague began, I was thinking of a friend who just lost a terrific amount of weight due to a balanced diet and exercise, and then she was diagnosed with breast cancer. Whenever the people suggest diet and exercise will make me healthy, I think: Ship has sailed. Sailed, boarded by pirates, plastered with barnacles and sunk.

I know I am returning to what I call health because Gary has segued from fellow sufferer to bitter sufferer. "GET ME THE BENDY STRAWS WHY DON'T YOU EVER BUY THE RIGHT TYPE OF COUGH MEDICINE STOP TOUCHING ME." That's okay, I know what he's going through. In fact, he's worse than I've been, and I am thrilled. Because I'm on immuno-suppressant drugs for the clinical trial and he is my Control. I expected to be so much worse than he is.

Granted, those frames took me the entire day, with three naps. Still, I fell better. I hope none of you ever get whatever the hell this has been.

Oh! And speaking of restored health ask me about my labia! Peachy and pink and perfect, thank you. No swelling, no bleeding this last month, and no new holes. So, diagnosis: strange virus. Don't know where I got it, so. don't rub your crotch across anywhere my labia have been. This PSA brought to you by the Missouri Crotch Council.

Posted at 11:25 PM in In Which We Mock Ourselves | Permalink

You just make me laugh with your particular sense of humor! But then I feel guilty.

Hattie - You were laughing at my crotch. It's okay. I don't mind. especially now that mine is (temporarily) perfect. Don't be fooled by the crotch that I got.

And yeah, I do the weight watchers cause i'm all prone to bouts of eating an entire bag of mini snickers.

I am so glad you are feeling better. Sounds like your med's are kicking some major ass.

Sorry that Gary is the control but srsly, if I had to pick one.... yeah.

Well now we're gonna need to know exactly where your labia have been. So as to avoid having our crotches near there, ya know.

I don't actually remember asking about your labia, but I'm happy for them.

Ah Tessalon Pearls. I know them well. Glad you have some good drugs. Glad you are feeling better.

On the other post, I had no idea your husband was such a rooster. He is quite the scrappy thing, isn't he. That's kind of cute!

Surprising Woman - He is a rooster! Exactly! Only Gary only struts, he never ever attacks. Makes me think of David Sedaris' monologues about his brother the Rooster.